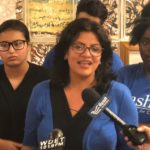 After Congresswomen Ilham Omar’s and Rashida Tlaib’s incendiary anti-Semitic rants directed at Jewish Americans and American ally Israel, the Democrat House “progressive caucus,” led by Alexandra Ocasio-Cortez, rallied around to protect and support them. The progressive media chimed in, supporting the Islamist congresswomen. Even after Rep. Omar dismissed the 9/11 attacks as “someone did something,” Democrat progressives defended her, accusing the president of religious bigotry when he objected.

Not to be outdone, the ever more progressive and pro-Islamist New York Timespublished a political cartoon that even they admit is anti-Semitic, as well as an article claiming that Jesus was a Palestinian, which was applauded by Ilhan Omar! The anti-Semitic congresswomen and media were right in tune with the powerful “Women’s March” leaders, who allied with notorious anti-Semite Louis Farrakhan, head of the Nation of Islam, calling him “The greatest of all times.”